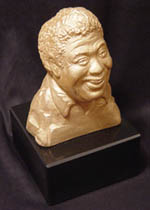 Each year The Cascade Blues Association honors those artists recognized for outstanding achievements over the past year with the presentation of the highly coveted Muddy Awards — named in memory of Muddy Waters. With special emphasis given to the local blues scene, artists, events and venues are nominated and then voted upon by the CBA membership, placing the selection of winners completely in the hands of local fans. This year, the CBA chose to honor Reggie with a Muddy in the horn category, and because it was his third consecutive win in that category, Reggie was also inducted into the CBA Hall of Fame.